You know when you open YouTube, and then its algorithm suggests you videos that you might like…well, today the almighty YouTube suggested me to check out this video by a music band called Arch Echo…so I checked it out. And to my surprise, it was a great instrumental song. I really enjoyed listening to it. Kinda even like overjoyed. So had to pause for a second and ask myself.

Why is it that sometimes instrumental music feels so good? Honestly off the top of my head, I can think of three profound reasons:

Honestly, a lot of times I think some singers/vocalists don’t really care what they sing or how they sing. Or even worse when you actually like the music of a song, and even the text/lyrics, but you don’t like the way that the vocals have been performed…maybe they sound goofy to you…maybe it’s supposed to be an upbeat song, and yet the singer sounds sad to you, or vice versa. I don’t mind the music of a lot of modern American pop and rap music…sometimes, I even try to ignore the lyrics, just to be able to enjoy the song…but God, sometimes the way that some of this new modern generation of singers/rappers sing/rap, God that’s awful and unbearable for me…totally ruins the song for me.

Sometimes there is even a song in front of me with good music and good singing in it, and yet I don’t like it…cuz I can’t take those words. Back in the day music was much more sincere…the words weren’t just thrown away for whatever’s sake…there was a meaning and purpose behind things. Nowadays, not only is most of pop music like that (where they somehow try to understand their market of listeners and their taste, and try to feed them whatever they want to hear to grab a quick cash from them), but also tons of music in other genres such as rap, rock, etc. with empty words and fake lyrics.

And there are tons of music with vocals, where instrumental parts of the music have been watered down, so that the singing can take on the front stage. And then you listen to a fantastic instrumental song, and you ask yourself “this is so cool! I never thought the guitar/keyboard/etc. can sound like this. Why can’t other songs have cool instrumental sections like this song?!”

I know, I bashed the songs with vocals pretty hard, but let me still tell you that, majority of my music listening still comes from songs with lyrics and singing. And I cannot get enough of a good pop song, with genuine lyrics and singing and that still keeps room for fantastic instrumentation such as Someone Like You by Adele, which I admired from the very first day I heard till now. hello i like listen to music instermantel such as piano -

Hi Khalil. Yes, this song that you just shared is very nostalgic for me because I’ve heard it many times since childood on national television as well as radio. Nice relaxing and calm song…actually whenever I listen to it, it always makes me think like “what is the meaning of life? Are we as human beings doing good enough in this life? etc.”

Hi Mahnaz…really liked those songs. They were more played with keyboard than piano, but still great songs. And I agree with you that instumental music has such a calming effect on our mind and body. When I want to listen to instrumental piano music, usually my first choice is a piece from European Classical composers such as Beethoven, Bach and Mozart. Even though there are also tons of good Jazz pianists such as Bill Evans.

thanks for sharing, I love both songs and found the artists
first song belongs to Tomas Lanquist 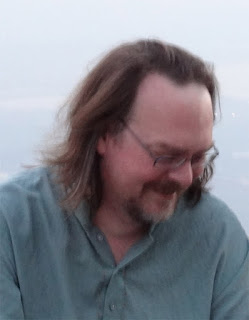 I was born in 1970 in the Swedish capital of Stockholm. My music interest started around the age of 14, when I discovered the British pop band Duran Duran. What impressed me the most back then, was the band’s keyboard player Nick Rhodes. After that I bought my first keyboard, a quite simple Yamaha home keyboard, and a little bit later a Yamaha Dx100 synthesizer. I also started taking piano lessons around that time. Earlier I had only played flute and clarinet at school. Not with very much success though…. A few years later, the Swedish television broadcasted Jean-Michel Jarre’s Rendez-vous in Houston concert. And that changed my focus from pop music to instrumental music, and I have never looked back since. Tangerine Dream and Vangelis came next. A concert in Stockholm by Kitaro in the late 80s was a very nice experience as well. In the early 90s, a friend introduced me to the music of Enigma. Micheal Cretu has definitely been a big influence, not necessary on my music, but more as a source of inspiration.At the end of the 80s, I finally had a small MIDI based studio and I started to write my own songs. With time, the studio expanded a bit, and also I started to find my own style when it came to song writing. A little bit later on, writing music was put on hold for a few years, while I studied computer science at the university. When my studies were finished, the need to write music emerged again. This was back in 2005. Technology had changed and suddenly I could do everything in the computer. And I went the software route. A couple of years later I started to buy some synthesizers again, after I got bored with the virtual world. Today, I use both Logic and Reason on the laptop, but I also have a small hardware studio setup.
second one belongs to Leo Rojas Pan flutist Leo Rojas (full name: Juan Leonardo Santillia Rojas) was born in Ecuador in 1984 and is best known for winning the 2011 season of the German casting show Das Supertalent. Rojas moved to Spain in 2000 and then to Germany, living in Berlin with his Polish wife; he often performed as a street musician until a passer-by informed him about the casting show. He became a contestant in the show’s fifth season, succeeding to the semi-finals with his rendition of “El Condór Pasa” (best known in a 1970 version by Simon & Garfunkel) and then winning the show with a cover of “Einsamer Hirte,” a hit song written by James Last and performed by Gheorghe Zamfir in 1977. Rojas’ version of “Einsamer Hirte” was released as a single shortly after the show’s finale (reaching number 48 on the singles charts), followed by his first full-length album, Spirit of the Hawk. The album, which was produced by Dieter Bohlen and reached number two on the German album charts, featured the two abovementioned songs as well as cover versions of compositions such as John Barry’s theme from “Dances with Wolves” and Martin Böttcher’s “Winnetou.”

this song is amazing